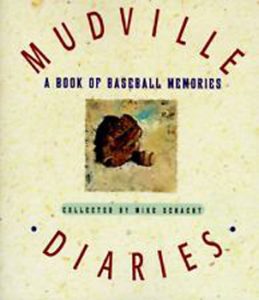 MUDVILLE DIARY
When I ran into Bill Freehan in the Krogers parking lot last winter, I didn’t think I’d be nervous, but I was. After I remembered that I was 43 and not a 14- year-old kid anymore, I asked him about Bob Gibson’s 17 strikeout performance in the first game of the 1968 World Series. He placed a bag of groceries in the back of his station wagon, paused a moment and shook his head. “That day in St. Louis, he was the best I ever faced. As soon as I saw him bust McAuliffe up and in, as soon as I saw the dust explode from McCarver’s mitt, I knew the game was over. Because I saw something only catchers can see, and I knew something only catchers can know.”

When I was nine years old we played Loch Raven for the county championship. We led 3-2 in the last inning with one out , bases loaded and our infield in. A smash was hit to me at third. I fielded it cleanly and threw home for the force. The next batter popped it foul and I made the catch near our bench for the last out.
My dad had captured the game on his eight millimeter camera and recently he reminded me of something I’d said on the morning of the game. At breakfast I could barely eat and he asked me why I was so nervous. I said, “It’s the most important day of my life.”

Dean Smith
When the fireflies came up, BASEBALL SATURDAY NIGHT

and all the neighborhood
kids gathered to play
sardines or ghost!ghost!
my parents carried their beer
and after-dinner smokes out
to the patio. Tuned to the game,
an old portable radio, black
and heavy sat in the kitchen window.

A rusted tin table pulled
up to the glider held
my parents’ drinks, an ashtray,
and, I guess, their dreams–some-
thing larger then the lawn and thirty
children screaming back and forth
through yards unfenced and free.

Under the benediction of dying
summer and our parents’
disinterest, we kids raced,
pleasure for us the momentary
state of unawareness. Innocent
of the wiles of adulthood,
guile and lies, we played —
stopping only when the moon
rose, sending odd shadows
around trees, into the hidey-
holes of childhood.

Trooping back to the house,
we’d find our parents mellow
as the twinkling stars, halfway
between caring and casual. Mom
vague; the ash on her cigarette
an ember; Dad intent, shoulders
hunched over the radio. “Strike one!”
“Ball two!” “Full Count!”
The announcer’s voice scratched
me into sleep, secure
as the game played on.

You have already seen about 200 games since the chill first started to leave the air, hovering in the misty March dusk. Thousands of miles, thousands of faces thousands of dumb questions, dozens of possibilities and few sure things. Today is the same as any other day since the season began and like all those of seasons past, as well.
You pull into the gravel parking lot, driving through the potholes gray with the afternoon’s unexpected rain. It has been so dry all summer that there was no fear of a rainout. Every diamond for miles around would soak up any moisture it could find. You check the layout of the field and the screen around home plate to make sure you are parking in the spot safest from foul balls, something you learned the hard way.
You have never been here before, this small town known to always have a competitive nine, but a town that has never put any kids in the pros or even the major college ranks. You figure to stay for a few innings then ask around for a decent restaurant that doesn’t close too early like most small town joints tend to do.
You get out of your car, not bothering with your speed gun or your book. Just a brief look see and maybe introduce yourself to the coach before you leave in case somebody is coming through the ranks in the future. You see the home team gathering around their cars parked down the left field line, laughing talking, punching, and wrestling around like teenage boys do. Somebody slips ice down another’s jersey then scoots away across the outfield grass, his victim in hot pursuit. There is beauty in the way these kids move, so lithe, so graceful, with that playful burst of energy that will wither in just a few short years.
Then two kids catch your eye as they stroll toward the dugout. One is about six feet tall, slender but with an athlete’s build. He should fill out to a taut 180 pounds in a few years. He moves like a cat; you can’t help but notice his grace. His smile and manner exude confidence bordering on cockiness. You have been around enough small towns to recognize the one is probably the quarterback for the high school when fall rolls around. The kid he is talking to does not have the same demeanor or the grace of his teammate, but you can tell he probably plays football during the fall too from the way he fills out his uniform. The perfect build for any college tailback. You imagine these two are just playing baseball to fill their time until football practice starts.
You drift over to the fence by third base, close enough to see what you want to see but far enough away from the dugout to avoid interrogation from any of the other early arrivals. As the players saunter in, you begin to notice something about the two earlier kids.
The quarterback is more fluid than you had thought; the ease with which he urges his body into motion is striking. As he moves to start his warmup tosses, it is with flawless form and perfect footwork. He laughs with the first teamers and gives the scrubs a hard time, making them earn their spot on this squad by putting up with his playful abuse. He postures for the young girls by the dugout. He is carefree and confident.
The tailback’s motions seem to suggest power. His massive musculature explodes into every throw. You can’t wait to see this one hit.
You watch the team take infield with the quarterback at shortstop and the tailback at first. The game begins with a treat as the pitcher gives up a walk and the next batter hits a routine double play grounder to the second baseman. It is routine until he tries to make the tag on the runner instead of making the easy toss for the force out. The runner eludes the tag and the second baseman is forced to make a late throw to the quarterback covering second.
Without a ripple of miscalculation, he takes the late toss and in a glide of exacting footwork and lightning quick hands, makes the putout, skips over the sliding runner and sends the quick peg to first to nip the hitter. Light applause and a few cheers come from the home side and a giant cheer leaps in your heart. This small town shortstop/quarterback is a defensive marvel. You wonder if he can hit. You won’t have to wait very long to find out.
The quarterback leads off. After watching a curveball break too close inside and then an inside fastball, he rips a hard fastball low and away down the right field line. The right fielder does a good job cutting the ball off, but the quarterback never slows and slides in to second under the tag of the surprised shortstop.
The second batter is the centerfielder. The other kid, the tailback who is playing first, strolls into the on deck circle. You are even more intrigued now. If he is hitting in the three hole he must hit a pretty decent average. The centerfielder lines sharply to third as the quarterback scampers back safely into second.
The tailback strides to the plate looking briefly at the third base coach. You sense he knows the call will be to hit away. The first offering from the opposing pitcher fools him. With a pitiful stab, his bat comes nowhere near the curveball. The pitcher looks in for the sign, rocks back, and brings another curve. The solid bang tells you the tailback was not fooled. Every head turns to watch a mammoth shot. Deep into left center, the ball arcs into the dusk.
Your head turns back to watch the two trot around the bases. Grace and power. You have stopped at the right place.

Back issues ( nothing on site)