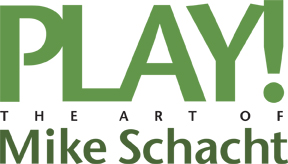 Mike Schacht, baseball-loving artist, author, and teacher, created stylized, romantic images of the game, its heroes, and its history. This exhibit, the first retrospective since 2008, represents the wide range of his creative efforts over four decades. 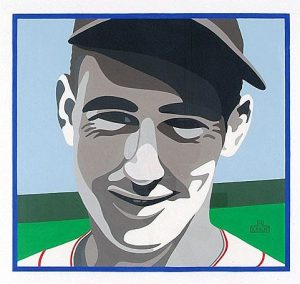 Over 100 works from visual artist and writer Mike Schacht (1936-2001) will bring baseball and its legends to life in the downtown Nashville Public Library Courtyard Gallery from August 7- December 31, 2016. The exhibit represents the wide range of creative efforts from this Baseball Hall of Fame and Upper Deck artist, and is the first retrospective since 2008.

Anchoring the exhibit are paintings, etchings and silkscreen prints of his baseball heroes, many inspired by his childhood scrapbooks and reflecting his choice to paint portraits of players early in their careers. Many are the original paintings for iconic portraits associated with the artist, among them Ted Williams, Jackie Robinson, Joe DiMaggio, Ty Cobb, Pete Rose and Willie Mays. Upper Deck cards from the early 1990’s and sketches for an unfinished mural of the first Baseball Hall of Fame inductees are also included. 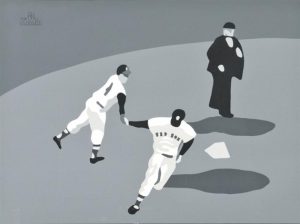 The game’s classic moments, rendered in the gray scale, recall the era of games on black and white television and include Willie’s Catch and Ted Williams’ Last Home Run. Player silhouettes in metal inspired the backdrop of Major League Baseball’s national office and appeared on Nicole Miller ties. A series of baseball homages to art world masters, permanently exhibited at the ESPN Zone in New York’s Times Square, first appeared in Fan, the art and literary magazine Schacht founded and edited 1989-2000. Mudville Diaries, a collection of five years of Fan, was published by Avon in 1996.

New York Magazine dubbed Schacht “Professor Baseball” for his popular classes at New York’s School for Social Research. Sport Collectors Digest named him to the Baseball Art Hall of Fame and MLB official historian John Thorn named him in the top ten baseball artists. Hofstra University chose his Babe Ruth portrait for the conference logo and commemorative poster of the Babe Ruth Centennial Conference in April 1995. He was the featured artist in the 1993-1994 Baseball Hall of Fame Yearbook.

Galleries in New York City, East Hampton, San Francisco, Toronto, Atlanta, and Lenox, Massachusetts have exhibited his work and he is represented in private collections and the Baseball Hall of Fame permanent collection.

Thank you to our exhibition sponsors: