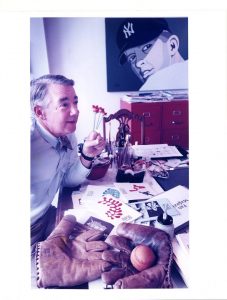 Hall of Fame and Upper Deck artist Mike Schacht has captured yesterday’s heroes and today’s stars in over 200 baseball paintings, silkscreens, and etchings.  He created and published Fan magazine, a baseball literary and art triannual.  And New York Magazine dubbed him “Professor Baseball” for his popular classes at New York’s New School for Social Research.

Baseball brought Mike back to his art after an early career in graphic arts and printing.  (He graduated from Trinity College with a B.A. in Applied Fine Arts in 1958.) His childhood heroes became his subjects as he created over 100 portraits, often working from his own baseball scrapbooks from the 40’s and 50’s.  His passion for the game and its legends is apparent in all his work.

Hofstra University chose Mike’s Babe Ruth portrait for the conference logo and commemorative poster of the Babe Ruth Centennial Conference in April 1995. Mike was the featured artist in the 1993-1994 Baseball Hall of Fame Yearbook. In addition to the Mike Schacht Gallery in Atlanta, galleries in New York, East Hampton, San Francisco, and Lenox, MA have shown his work.

His work is represented in many private collections and the Baseball Hall of Fame permanent collection.